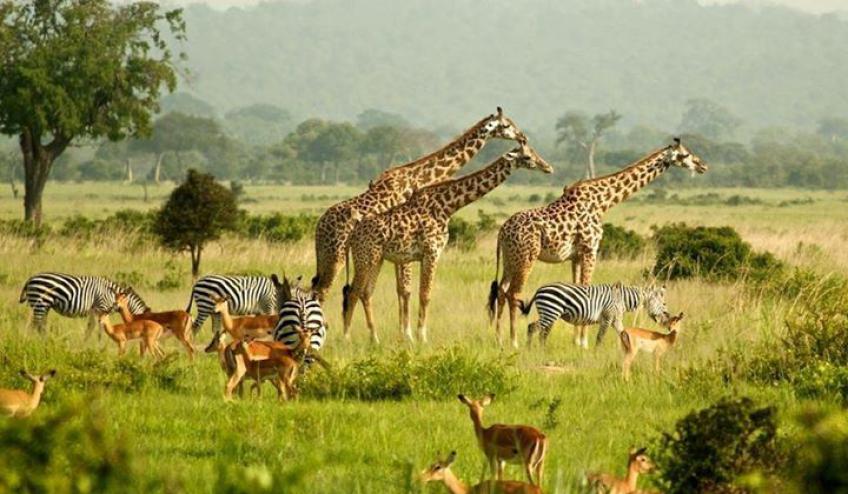 At Murchison Falls, the Nile squeezes through an 8m wide gorge and plunges with a thunderous roar into the “Devil’s Cauldron”, creating a trademark rainbow

The northern section of the park contains savanna and Borassus palms, acacia trees, and riverine woodland. The south is dominated by woodland and forest patches

Murchison Falls National Park lies at the northern end of the Albertine Rift Valley, where the sweeping Bunyoro escarpment tumbles into vast, palm-dotted savanna. First gazetted as a game reserve in 1926, it is Uganda’s largest and oldest conservation area.

The park is bisected by the Victoria Nile, which plunges 45m over the remnant rift valley wall, creating the dramatic Murchison Falls, the centerpiece of the park and the final event in an 80km stretch of rapids. The mighty cascade drains the last of the river’s energy, transforming it into a broad, placid stream that flows quietly across the rift valley floor into Lake Albert. This stretch of river provides one of Uganda’s most remarkable wildlife spectacles. Regular visitors to the riverbanks include elephants, giraffes, and buffaloes; while hippos, Nile crocodiles, and aquatic birds are permanent residents.

Murchison Falls is notably blessed with over 144 mammals, 556 bird species,51 reptiles, and 51 Amphibians. With a great number of African elephants, Murchison falls is impressive all year round. The aerial survey noted over 900 individuals and 1,330 and is at an increase. Historically Giraffes exclusively inhabit the northern sector of the park. Buffalo populations have spiked to over 10,000 while Uganda kobs have leaped to more than 35,000.

The bird checklist with the shoebill as the most common along the river stretch approaching the Albert delta and many profolic bird species occupy the park. The white crested turaco, red winged grey warbler, all associated with woodland in the southern bank.

Murchison Falls National Park is located 305km/190mi north of Kampala. The drive to the southern entrance gate takes 4 to 5 hours. Coming from the southwest, the 280km/170mi drive from Fort Portal takes at least 6 hours. Allow another hour or 2 from the entrance gate to most of the lodges.

It is also possible to fly to the park by chartered or scheduled aircraft service from Entebbe International Airport (EBB) or Kajjansi Airfield near Kampala. Pakuba Airfield is the most convenient point of arrival for the main cluster of camps and lodges around the park headquarters at Paraa. Other options are Chobe or Bugundu.

When flying from abroad, you’ll arrive at Entebbe International Airport (EBB). It is located 46km/29mi from the capital (Kampala). Your local tour operator will usually arrange for you to be picked up at the airport and will take care of all further transportation as part of your safari package.